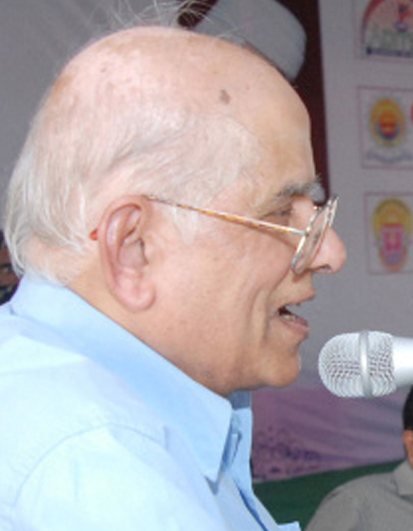 Professor Rama Rao Pappu obtained Ph.D. in Philosophy from Southern Illinois University. He is well-known in North America as the Founder-Director of the International Congress of Vedanta which he established in 1986 for bringing together, on a common platform, Indian, American and European scholars to discuss current issues and foster research in Indian philosophy and religion.

He has organized sixteen international conferences in the U.S.A., Trinidad, Russia and India. The Indian Council for Philosophical Research nominated Professor Rama Rao as a Distinguished Visiting Philosopher in 1998, and the National Endowment for Humanities appointed him as Visiting Philosopher to Wittenberg University, USA. He was the recipient of the “Recognized Professor Award” and a “Certificate of Distinguished Service” given by Miami University, TANA (Telugu Association of North America) Award in 1999.

Students of GITAM Institute of Management

In his lecture, Professor Rama Rao Pappu, observed that Gandhi is a unique personality. It is due to several reasons. Firstly, it is because one hundred volumes on the Collected works of Mahatma Gandhi were published by the Publication Division, Government of India. Secondly, about 100 biographies on Gandhi were published over and above the Autobiography of Mahatma Gandhi. Thirdly, several hundreds of photographs were published on Gandhi in print during his time. Fourthly, several films were produced, and novels were written and published on Gandhian philosophy. In this sense Gandhi is a unique personality. “Knowing Gandhi” is different from “Understanding Gandhi”. In order to understand Gandhi, one must adopt Gandhian way of life.

Prof. Rama Rao further said that one has to understand Gandhi from three dimensions- political, religious and philosophical. Gandhi had enormous power without any political position. His charisma is the source of his power. Prof. Rama Rao felt that Gandhian philosophy has a dialectical thinking as rightly pointed out by Prof. K. Ramakrishna Rao, in one of his seminar addresses. Other important teachings of Gandhi include “voluntary poverty” and “village self-sufficiency’. If a village is self-sufficient, then we need not transport many of the goods from the towns to the villages and thereby we can arrest pollution, caused by the transport. Decentralization and village self-sufficiency are the important thoughts of Gandhi.