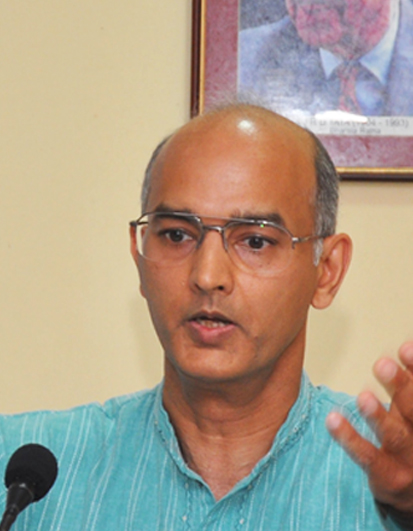 Sushil Mittal is Professor of Religion in the Department of Philosophy and Religion and Founding Director of the Mahatma Gandhi Center for Global Nonviolence at James Madison University. He has served on the faculties of the University of Florida in Gainesville and Millikin University in Decatur, Illinois.

His discipline by training is cultural anthropology, but he is located in a department of religion where he teaches Hinduism and Gandhian thought. He has conducted archival and field research in Canada, India, South Africa, and the United States at intervals during the last two decades. He is the (Founding) Editor of the International Journal of Hindu Studies (1997- ) and the International Journal of Gandhi Studies (2012- ). Professor Mittal was born in Canada (his “janma-bhumi”) but has now dedicated himself to working in the United States (his “karma-bhumi”) and he looks to India as the main source of his spiritual inspiration (his “dharma- bhumi”).


Who am I and What is the Meaning of Life?

Students of GITAM Institute of Management & GITAM School of Law

The life of virtue in Hinduism first presupposes knowledge of who we really are. The Hindu tradition identifies one’s true Self as the philosophically and mystically discoverable essence of all reality, and contrasts it to a “lower” self that is continually reborn as a function of one’s karma.

The object of religious life for most Hindus is to produce good karma that will result in a better rebirth. The principal way of achieving this is to follow the social and personal virtues appropriate to one’s stage of life, and to do so with contentment, equanimity, and detachment. One’s “character,” good or bad, is largely defined by one’s conformity to one’s own appointed duty and the virtues related to it.